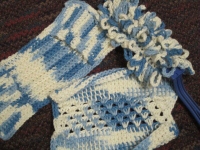 Instead of buying those expensive disposable floor cleaner pads and dusting wand refills, why not follow Jodi's example and crochet some re-usable pads?  Before using, spray with a little Endust to increase the dust-collecting property. 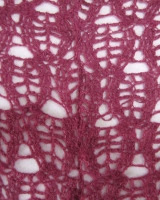 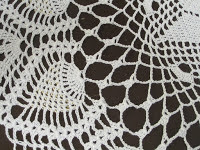 Once again, photos just don't do justice to Joy's handiwork.  This doily (in size 20 cotton thread) utilizes seed beads in the pineapples.  You have to look close to the the tiny gold beads against the white yarn, but in real life, those pineapples sparkle in the light. 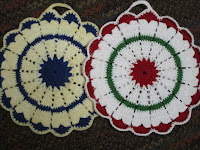 Marilee is continuing her series of vintage copies.  The original is on the left, her copy on the right.
One of the challenges is that modern yarns aren't quite the same weight as vintage yarns, resulting in a project that doesn't have the same thickness as the original. 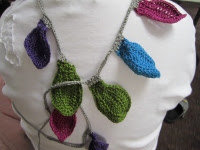 This pearl cotton necklace hasn't been blocked.  Maxine hasn't decided whether to block it or not.  It does curl a bit, but you can still tell it is a string of Christmas lights. 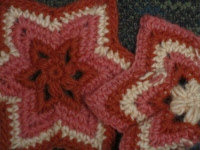 This is another Maxine project, crocheted from Pastaza, a discontinued yarn that is half llama, half wool.  These star motifs are part of a large shawl.  The challenge of using a discontinued yarn is finding enough to complete your project if you run out. 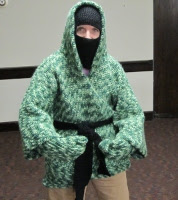 Joan's project was the result of a request from a little boy who loves ninjas.  Joan crocheted a jacket, mitts and a balaclava (to hide the ninja's identity).  This young warrior is a black belt in martial arts.  No, the model isn't Joan and it isn't a little boy.  Do you know who it is?


Lynn didn't want to have this simple coaster photographed because it hasn't been blocked yet, but we've included it here because of the interesting yarn she used.  This company specializes in hand-dyed yarns in colors inspired by Chile.  A simple stitch can show off a variegated or space-dyed yarn. 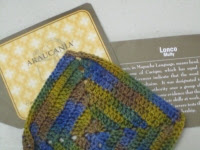