Roving Crochet Report: Behind the Scenes at Textile Center Exhibit

If you follow our blog, you know that Crochet Twin Cities became an organizational member of the Textile Center of Minnesota in June 2013 and that we started holding our monthly meetings there in September 2013. But what you might not know (because it all happened so fast) is that this week was the opening of Start Seeing Crochet, our very first exhibit at the Textile Center!

We hope you can come to the exhibit and see the final result - but what you won't be able to see is all the hard work that went into preparing the exhibit. So this blog post takes you behind the scenes of some of the activity that goes into an exhibit installation. 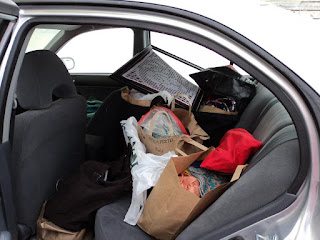 When Kraig (the gallery manager) contacted us, he wasn't quite sure how much of the gallery space would be allocated to our exhibit so he encouraged us to think more items rather than less. Our members really took his advice to heart, this is my car packed with crocheted items. And this isn't even all the items that members lent for the exhibit! 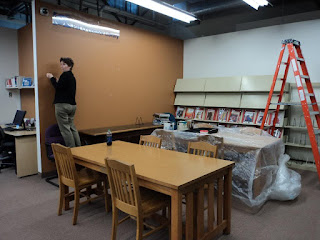 After an exhibit comes down at the Textile Center, the walls get touch-up and repair - patching nail holes - before the next exhibit goes up. The Textile Center has four galleries and all of them were getting new exhibits so walls were repainted as well. One of the staff members told me that the main gallery is usually repainted in the specific color requested by the main artist; one of the details for planning an exhibit. 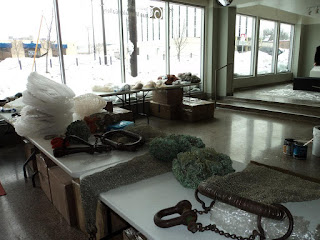 This is the main gallery, the Joan Mondale Gallery at the start of the installation for Leslie Pontz's Shaping Space exhibit. Leslie is an artist who creates unique sculptures from crocheted wire combined with iron and other materials. The number of boxes is amazing - imagine how much care and precision it takes to pack an exhibit for shipment! 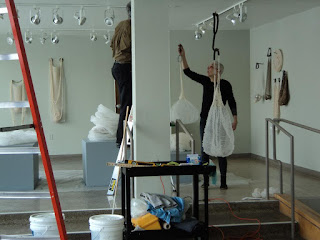 Leslie and Kraig got right to work on Leslie's exhibit. I was very intrigued - I know that Leslie had not actually seen the gallery before she arrived - but she seemed to know exactly where she wanted things to be placed. She and Kraig must have had a lot of detailed emails and other communications in advance. 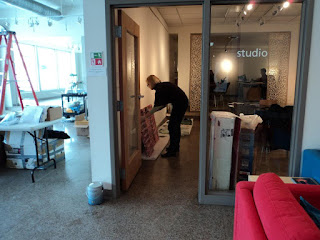 Meanwhile, in the Studio Gallery, Anna Carlson was busy installing her exhibit, Designing the Self. Anna is a Twin Cities artist and teacher whose work includes apparel design and textile design.

Until I saw both Leslie and Anna in action, I thought that all artists had a "team of elves" who did a gallery installation overnight, like magic. Not so! 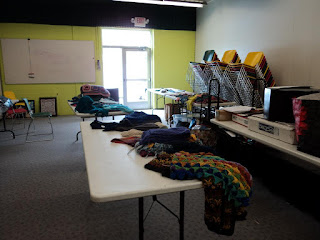 So now back to our work, enough roving around to other exhibits with my camera!

We had not had time to see all our items in one place so Kraig immediately found us a room to work in. We called it our triage room and set to work there sorting and grouping items. 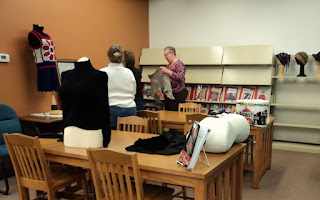 We started arranging items in the Library Gallery because it included display areas that did not require pounding nails into the wall. Kraig told us that he would prefer to hang the items that required nails and dowels; we were happy to comply with his request because we knew that the end result would look much better. 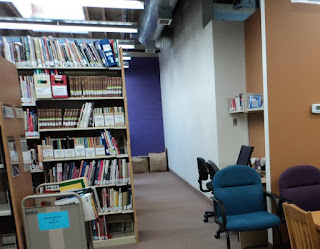 Kraig continued to help us out when we needed him. We had two different ideas about what to do with this library wall. One idea was to place large items on the wall; another thought was to place smaller items there. We realized we needed a professional opinion on which option to use and Kraig helped us decide; you'll see result below.


The installation actually continued for three days! All the pictures above were from the first day (Tuesday, March 4). Other members of our group came back on Wednesday - but work time that day was a somewhat limited because a local TV station was there to film some of the artists and activity at the Textile Center. At the end of the day Wednesday Kraig asked to have the items laid on tables in front of the walls where they were to be placed so that he could do the final hanging. On Thursday (the day of the opening), there were still signs to be hung and final placement to complete - so folks from our group continued to work that day alongside the Textile Center staff. Leslie pitched in to help us too - and, wow, the end result was stunning! 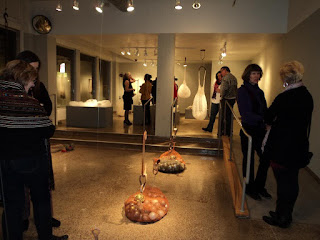 Here is a picture of the Joan Mondale gallery on opening night. Doesn't this look different from the picture at the beginning when Leslie and Kraig were starting to hang the work? 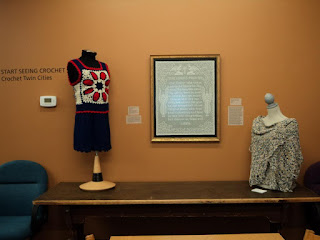 This is main wall in the Library Gallery that shows our exhibit sign and items that Joan provided for the exhibit. The center piece is a fillet crochet piece made by Joan's grandmother in 1936, the vest and skirt is a vintage outfit from the 1970's made by Joan's mother, and the tan outfit was made by Joan herself. 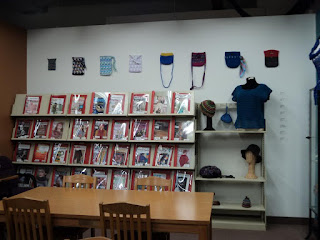 Remember the wall space above magazine rack? The team placed a line of purses above the rack and don't they look great! 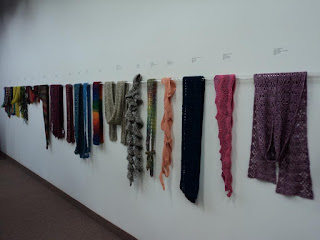 And this is how the library wall ended up - what a beautiful row of scarves! Since you can't step very far back from this wall (library stacks are very close here), this is the perfect spot for people to get up-close and personal with smaller items. 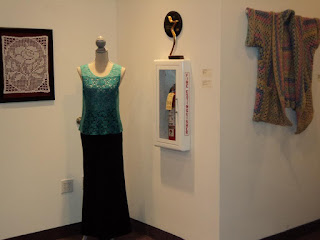 And here are some more of the items in the Community Gallery: Carla's framed fillet, Jodi's teal vest, and Carol's "Unsquare Granny" cardi wrap.

Make sure you take some time to visit the current displays!