This is the first in our bog series where Crochet Twin Cities members get a chance to introduce themselves and tell the group a little more about their crochet background and CTC history. Read through our first introduction - hopefully it will help you know Carol a little better and also inspire you to complete an interview yourself!

Carol, how long have you been a member of CTC?

I'm one of the original CTC members (only we didn't call it that back then). I wasn't one of those who organized that first meeting, I was one of the attendees. I think there were seven of us in all and we met at a local yarn shop. If I'm not mistaken, the first topic of study was hairpin lace. A couple of years later, another member offered to set up a blog if somebody was willing to do the entries--and that somebody was me! I wrote the blog entries and sent out the email notices for a long time before we wrote bylaws and elected officers. And then it was decided that what I was already doing was the secretary's job, and so I officially became the secretary for two years. I've been very involved right from the start. What has kept me coming back all these years is the shared enthusiasm for crochet and all things fiber. I have learned a lot! 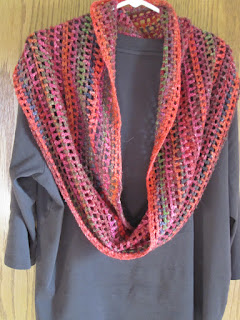 Who taught you to crochet?

My Croatian grandmother taught me to crochet when I was in 4th grade. She could not read a pattern but could copy the most complex doilies you can imagine. I mastered the stitches and then I was on my own to create as I saw fit. An aunt later taught me the names of the stitches but I didn't really learn to read patterns until just a few years ago. That is why I like charts best; they make more sense to me. I have collected a lot of books of stitch patterns, which I use as the basis for all sorts of projects. Unless I'm doing thread work, I prefer to create my own designs, like this moebius cowl.


What other crafts do you enjoy?