A Cold but Rewarding Day at the Farm(s) 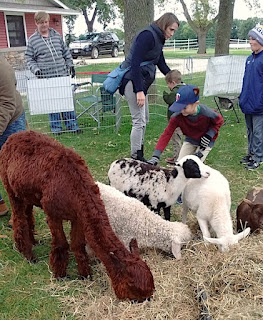 Several CTC members braved the wintry cold the last weekend in September and demonstrated crochet at four local farms during the North Star Farm tour. Judith was at Windswept Hills in Farmington, Julie was at Rush River Fiber in Bay City, WI, Kathy R. was at Sutton Ridge in Jordan, and Kathy B. was at Rach-Al-Paca in Hastings.

Everyone reported having a great time and seeing a lot of people who expressed interest in crochet and CTC, especially in the informal Fourth Saturdays with CTC. Visitors ranged from kids to experienced fiber friends, including knitters, crocheters, weavers and spinners who were intrigued by the crochet demos. Many left the experience inspired, saying, "I'll have to get back to crocheting again!" One little girl was in awe that Kathy R. had actually made the things she was wearing!

There were lots of cute animals on display, including two baby goats at Rush River Fiber who were sporting sweaters! Some of the farms had sheep shearing demonstrations. CTC member Felicia watched a spinning demonstration and learned a helpful tip about wool socks - always wear silk liners and then you won't have to wash your socks as often. Felicia got to pet an angora goat, who had the softest, curliest coat, and a donkey. She especially loved the miniature Sicilian donkey, even though they don't produce any fiber, they are super adorable and are striking because of the distinctive cross on their back.
Left: Judith demonstrating at Windswept Hills
Right: Kathy R. demonstrating at Sutton Ridge
at 10:15 AM