Here's a report from two of our members, Judith and Kathy, about an exciting community project that is being exhibited through November 21, 2015. 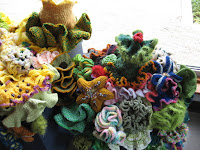 Presented by the Minneapolis Institute of Arts (Mia), the Minneapolis Satellite Reef-- a part of the worldwide Hyperbolic Crochet Coral Reef Project created by Margaret and Christine Wertheim for the Institute For Figuring in Los Angeles--debuted on Sunday, August 23rd. The Mississippi Watershed Management Organization (MWMO) held a thrilling pre-opening event for the contributors and their family and friends. The entire lobby of the beautiful new MWMO building has been transformed into a gallery showcasing the Minneapolis Satellite Reef in a sensory delight of fantastical crocheted coral pieces in all imaginable designs, shapes, sizes, and brilliant colors. But at the core of the project are hyperbolic shapes, best demonstrated by these crocheted forms. The reef is art, an exploration of topology, and at its heart an urgent plea for humanity to stop pouring poisons and trash into our seas. 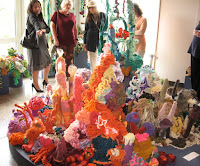 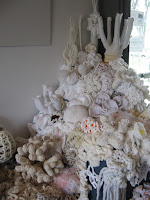 The 1300 individual pieces are mounted in undulating sections, including a magnificent center focal point of corals in orange and multiple other colorways, an elegant bleached white coral reef showing the tragedy of dying corals, and a trail of brilliant blues with hanging green "kelps" dangling from the ceiling next to a rising mound of yellow corals. A blazing sea-wall of red corals meets the viewer at eye level and above.

Also included in the gallery are other manifestations of sea-life. Not far from a group of hanging jellyfish, a video monitor runs continuously to show the installing of the Satellite Reef from Day 1 through completion, followed by the TED Talk by Margaret Wertheim, co-founder of the IFF, explaining how the concept of a crocheted coral reef first came about in 2005. There’s a chalkboard explaining the mathematical principles of the non-Euclidian shapes that the hyperbolic crocheted forms represent. Finally, a large wall plaque credits each individual contributor to the Satellite reef by name, honoring this exceptional community of crocheters of all ages and skill levels who came together to create the Minneapolis Satellite Reef.

Since January, Mia has invited the community to participate in the making of a Minneapolis Satellite Reef, part of the Institute For Figuring’s ongoing Satellite Reef program. Citizens of the Twin Cities and beyond were encouraged to create crocheted corals to contribute to the reef through the end of July 2015. More than 400 people attended crochet workshops during that time, with over 180 contributing works, including some mailed in from Hawaii.

Organized by Mia and created by the community, the Minneapolis Satellite Reef will be exhibited at the Mississippi Watershed Management Organization Community Facility, 2522 Marshall Street NE Minneapolis (http://www.mwmo.org) from August 24 to November 21, 2015.

All photos are personal photos of the Minneapolis Satellite Reef, a part of the worldwide Hyperbolic Crochet Coral Reef Project created by Margaret and Christine Wertheim for the Institute For Figuring in Los Angeles, made by over 180 individual contributors.

Thanks for the very information report, Judith and Kathy. And thanks for the pics Judith, Kathy, and Lisa. We hope everyone takes time to see the satellite reef before the exhibit ends - click here for a google map to the MWMO facility.