What do you call someone who has attended every single Chain Link Conference but one?  Our Chapter President, Gail!

Yes, folks, Gail has attended all but the very first conference.  Her advice to us before the Minneapolis conference was to stay in the conference hotel, as you don’t want to miss any opportunity to meet other crocheters and make contacts.  Nobody heeded that advice, but Melanie and I wished we had.  I bussed to the conference (only a 20 minute trip, with one transfer) but Melanie drove from the far southwest suburbs (a very long drive).  And boy were we tired!  The three-hour classes require a lot of concentration.  Two tough classes in a day, and when it’s time to go home, the butt is dragging and the brain isn’t functioning, making for a tough commute whether you are doing a short bus ride or a long drive.  Consider that lesson learned.

What do you call someone not afraid of a challenge?  That’s Gail, again.  She took up the hat challenge issued by the Northern Illinois chapter.  Gail crocheted 190 hats.  Someone else did 208 hats.  The rules said you have to be present to win, and Gail was there.  So she has another name:  winner!  The prize was $250 to spend in the market place.  Gail spent that on five (yes, 5!) different skeins of luxury, fantasy yarn.  Silk.  A fine blend that has strung with teeny tiny beads.  Hand-dyed.  If you are going to win some money, don’t spend it on average stuff.  All I can say is, now I know what a $50 skein of yarn looks and feels like—it’s pretty darn nice!  We are all eager to see what she does with these yarns.

Lynn was also a winner—of the door prize at local yarn shop, 3 Kittens.  She’s looking forward to spending her gift certificate.  Lynn did not take any classes, but had a great time shopping and visiting with other crocheters on Friday.  What a treat to meet Evie Rosen, who started "Warm Up America".  She was there to teach beginner knitters, and graciously helped Lynn with some questions she had on a knitting project she was finishing up.  Rosen has such a great sense of humor and was very helpful.

One of the best things about attending conferences like Chain Link is meeting like-minded crafters.  The entire place was packed with potential friends, every one enthusiastic and willing to share.  Small talk was absolutely unnecessary—everyone just jumped right in.  As one person said, these were friends just waiting to be discovered. 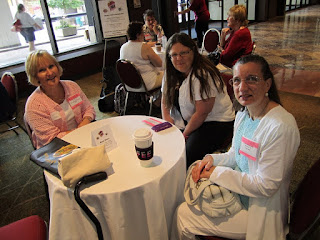 The place was packed with what I call “walking refrigerators.”  For some people, “art” is what you buy and hang on your walls.  For others art is what you paste on your fridge—or throw on your sofa, or pin on your purse.  There were some lovely pieces thrown casually over shoulders (I remember a lavender alpaca lace shawl that I wish I’d photographed).  Everyone was willing to model or answer questions.  Melanie wore some sweaters crocheted from thread that caused the rest of us to drool.  Carla wore a shell that she had crocheted.

Another highlight was simply getting to know chapter members better.  Yeah, attending the conference is rather expensive, but if you are spending the money, might as well splurge on lunch at the conference hotel.  A number of us did that, and we discovered we enjoyed each others’ company even when we weren’t concentrating on crochet.

Let’s talk about classes.  All teachers aren’t created equal, but it can be a thrill to take a class from someone whose name you recognize from publications.  Julie took a tunisian class that inspired her to return to a lace-weight shawl that she had earlier set aside.  [A picture of that project was included in the 5th Saturday summary.]  Everyone walked away from class with swatches.  The smarter instructors provided attendees with tags to label the swatches.  You think you will remember what you did when you get home, but I’m here to tell you that isn’t always the case.  From some of our own chapter meetings, it is apparent that some (like Gail and Maxine) are pretty religious about tagging swatches. 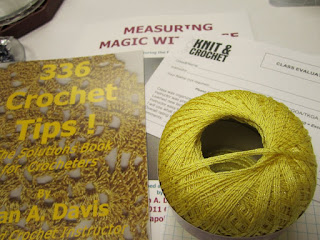 Another word about classes:  I took three different ones from past president Marty Miller, who believes that if people are taking technique classes at a conference, the manufacturers should provide some yarn to work with.  My entire take of free yarn was fifteen skeins, including one ball of thread; most of it was cotton, including top brands. Not everyone came away with yarn from their classes—I sort of lucked out.

Not sure who attended the banquet, but we know for sure that Melanie did.  She says it was wonderful to receive her Master of Crochet Stitches and Techniques pin on stage.  One of the best things about the banquet was the fact that you could actually sit there and knit and crochet!!  How many banquets/meetings have you been in where you really wanted to be able to do that and couldn’t?  Vickie Howell was a the commentator at the style show – filled with fun fashions!  Would love to have seen those, but will have to wait for CGOA to update their website. 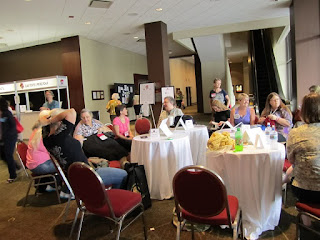 Minnesota people as well as members of other chapters join us.  It was great that some of our members came to the conference even if they didn’t take any classes; some, like Jeanne and Jodi, came specially for the 5th Saturday meeting.  [There is a better picture with the 5th Saturday posting.]