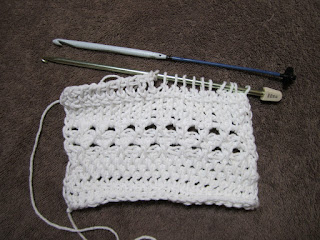 The study topic for the November meeting was Tunisian crochet.  Maxine and assistants Julie and Barbara walked us through a simple dishcloth utilizing six different Tunisian stitches.

The December meeting will have two parts.  The first is a business meeting that will cover a variety of topics, including a new  meeting space and recruiting volunteers to share tasks currently done by Carol and Maxine (the blog!).  The second part will be a swap meet.  Items to swap can include yarns, books, equipment and services (such as finishing another's incomplete project).  Specifics on how the swap will work will be included in the December meeting preview.
at 7:32 PM