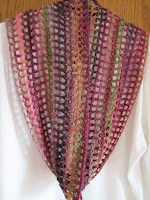 A number of people saw my moebius at the November meeting and asked me for the pattern.  Fortunately or not, I did not use a pattern.  I had done a search for moebius patterns on Ravelry but found nothing that would work with the yarn I intended to use, so I made my own pattern.

There are some interesting facets to the moebius that present some design challenges.  The first challenge is the starting chain.  Once you have crocheted your starting chain, you twist one end 180 degrees and slip stitch it to the opposite end--easier said than done.  Also, in many designs, the beginning chain appears very obvious; unless you want that beginning chain to be a design element, it can look like a flaw.  The second challenge is to design a stitch pattern that does not have obviously different front and back sides--unless you want that difference to be a design element.  As you crochet the moebius, you crochet both edges at the same time, only one edge will show the right side of the stitch pattern and the other the wrong side.  Another challenge was my choice of yarn, which is self-striping.  I didn't want the yarn to fight with a stitch pattern; as the garment grows from the center outwards toward the edges. 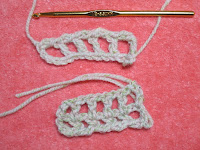 I took 2 classes on beginning chains at the CGOA conference; one was dedicated solely to foundation chains, the other to non-chain beginnings.  I used a foundation double crochet (fdc) lattice to begin my mobius.  The fdc is shown on the bottom of the picture at the left, with a second row of dc lattice.  After examining my first completed moebius, I think I should have used a foundation triple crochet (ftc) lattice instead (upper sample).  As you can see by the two samples, the triple lattice ends up the same height as the actual dc lattice of the mobius. 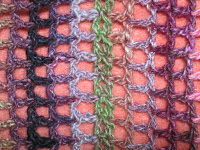 The next picture is of my dc mobius, in which I crocheted into each dc  of the row below.  The green stitches in the center are the fdc lattice. You can see that the stitch height is noticeably shorter.  If doing this pattern again, I would use the ftc instead and use dc throughout the rest of the moebius.  The yarn is Noro Silk Garden with an I hook with 75 stitch units (one unit being a dc and ch, ending with a dc 1, ch1, dc).  I used 2 full skeins.  The stitch pattern was deliberately simple to feature the yarn, not the stitch pattern.  There are some basic moebius directions on Ravelry. 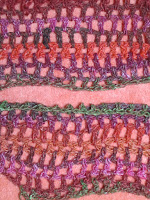 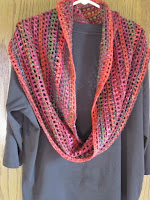 My second moebius was made of Noro Silk Garden Sock with an H hook.  The foundation is about 125 stitch units as this garment is intended to cover the shoulders.  The same fdc lattice was used.  Instead of putting a dc in every dc to create a lattice, I put my stitches into the chain space to create a mesh.  I randomly used blocks of  hdc and dc stitches.  DC were put into stitch blocks composed of hdc, and hdc into blocks of dc.  This was done to give a subtle shift to the rows, to de-emphasize the stripey look caused by the finer yarn and the larger moebius loop.  The colorways in the two garments aren't the same, but they are similar.  However, the end result is very different.

There have been some requests to make this moebius the subject of an upcoming meeting.  Web 2.0 is the topic for February, but because of equipment requirements, we might want to schedule that meeting for a later date and do the moebius instead.  Also, basic garment construction is scheduled for the spring.  If we do devote a meeting to the moebius, I will provide a written pattern.  The main focus would be on learning how to create the fdc lattice upon which the garment is constructed.
at 12:28 PM