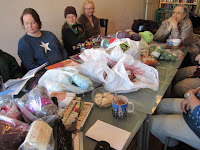 Shark Week feeding frenzy?  No, that was us, faced with an almost alarming amount of yarn and books to swap and share.  Everything was put on the table, with each donor giving a brief description and explanation of the donated item.  After everyone had a chance to look at the stash, auctioneer Maxine went item by item through the yarn stash.  If two people wanted the yarn, a quick negotiation was held, with the yarn going to the person who wanted it more than the other; if both people wanted it equally,  a quick drawing was held.  Six people were in on the drawing for a bag of rust-colored bamboo blend skeins.  There was something for everyone, from thread to Christmas novelties to bulky weight yarns.  Someone contributed a small stack of vintage thread crochet magazines and books of doily patterns--too bad we didn't film the wheeling and dealing that took place to divvy those up, as it was amazing!  Almost everything found a home. 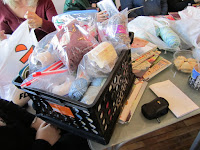 (This is a first for us: not one single project was held up for show and tell. Not one! We were so anxious to get our grubby mitts on the swap yarns and books that bragging rights were the last things
on our minds. Check this space in three months time to see projects made out of this stuff.)

After the exhilaration of the swap, we held a brief business meeting.  Pictures of the proposed new meeting space were passed around and the price discussed, as well as all the pros and cons.  We voted to go ahead and secure the space for six months; Carol and Maxine will finalize arrangements.  We have enough money in our Treasury to secure the room for at least three months.  The new space is located in Prospect Park (near the Textile Center), not far from our current location.

We have been very loosely organized (never even elected officers!) but now need a bit more structure, particularly if we have the financial responsibility of renting a meeting space.  It was suggested that we explore the idea of dues; currently, we have a suggested donation of $1 for each meeting attended.  Five people volunteered for a steering committee that will develop a basic outline for our organization, from officers to bylaws.  The committee's recommendations will be presented for approval by CTC members in a month or two.  We have a meeting schedule that goes out through April, so the program committee needs to meet again to work on some new topics.

Please continue to think about how you can contribute to the group's mission.  We already have specific volunteer offers regarding the blog and charity projects, but we need more helpers. 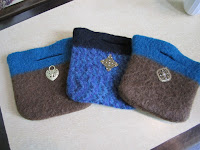 The next meeting will be January 14, 2012 in our new space!  Peggy will lead us through a felting project to produce a handbag.  A materials list and pattern link will be provided in the January meeting preview.  You will need two skeins of 100% wool worsted weight yarn (no super-wash).