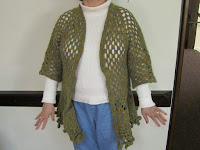 One of the best things about learning new things at meetings is seeing what people do with them.  Last August, we had a class on granny squares that expanded the idea of granny from square to triangle to rectangle to hexagon. 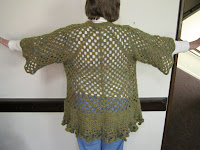 Joan made a sweater out of two large hexagons (check out the August meeting summary for links to patterns and youtube videos).  She added some extra length to the bottom and made a decorative edge that was a combination of small pendants and ruffles.  This sweater was literally "hot off the hook--Joan hadn't even had time to block the sweater yet.  When she does, that fancy edging on the bottom will show off nicely.

If you look closely at the back view, you see the sweater is seamed down the back.  There are seams on the upper side of the sleeves as well, with the seams starting at neck edge and going down to the bottom edge of the sleeve.  Joan chose an interesting wool blend yarn for this project (I've already forgotten the name--it was something new to me). 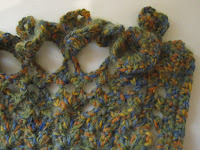 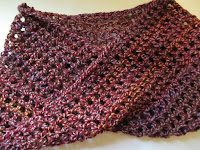 Last month's class focused on Carol's moebius.  So this month we got a chance to see what others
could make of the concept.

Peggy used the same Plymouth Encore yarn for two different moebius projects.  This is a good illustration of how a change in stitch pattern can make the same yarn look entirely different. 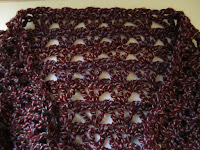 The first was the pattern as Carol taught it.  It needed only one skein and yet produced a garment that could cover the shoulders.


The second was a purchased pattern that used a shell pattern stitch.  This garment was larger than the first and covered not only the shoulders but upper arms as well. 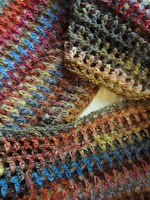 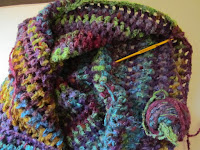 Jeanne also made two garments, both using Noro yarns.  The second moebius was still in process, as you can see by the hook and ball of yarn.  This shows how a simple stitch pattern makes the most of boldly colored yarns. 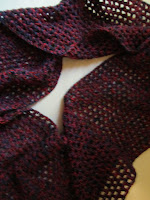 Maria Ann's moebius was made of a cotton multi-stranded yarn, with each strand being a different color.  This picture does not do the garment justice (it's hard to photograph dark colors if you don't have the right light). 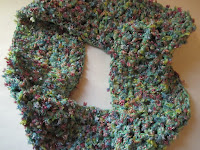 Gail's moebius was intended to be worn just around the neck.  She used an interesting novelty yarn that had a lot of texture and glitter to it.  This moebius was shorter and narrower than the others, but was the perfect length for Gail. 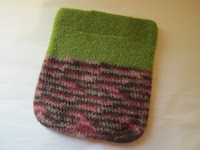 And yes, we are still working on felted purse projects.  Jean made this one, which she said was "felted within an inch of its life."  No kidding--it lost all stitch definition and turned into a perfect felt! 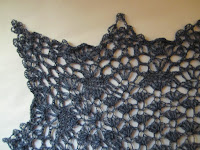 Hilary finished this lace-weight alpaca shawl made from the Interweave Crochet Dahlia pattern.  Since she intends to wear this shawl with jeans, she did not pin out all of the edging to block.  This photo shows the lace edge detail.

Jody with a Y used an iPad to show us her latest project--the crocheted representation of Terry Pratchett's fantasy world, "Discworld," which is a flat planet riding on the back of 4 elephants standing on the back of a tortoise that is flying through space.  Jody say if you haven't ever read any of Pratchett's books, check them out!  They are hilarious fun and also good social commentary. 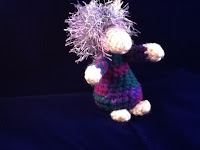 Patterns for the elephants and the tortoise are available on PlanetJune -  http://www.planetjune.com/  There are also suggestions for how to make the Discworld, but you're left pretty much on your own for that piece, since it is based on Pratchett's copyrighted map of his Discworld fantasy world.  Moptop is the name of this little character. This little guy (gal?) on the right is from a free pattern on PlanetJune. Lots and lots of wonderful amigurumi patterns (some free, mostly to purchase) on that site.