This is a report from Maxine about a fiber-related event she recently attended.

The party within a party was held at the American Swedish Institute (ASI), located at 2600 Park Avenue in Minneapolis, The Institute is one part early-1900 mansion - Turnblad Mansion, aka the "castle"- and one part modern, the Nelson Cultural Center. The ASI hosts a changing series of exhibits, educational programs, and events. One of the reasons I was interested in the party was the opportunity to see the mansion again. I had only visited ASI once before; during our December 2012 Fifth Saturday outing to view a fabulous display of Nordic lace.

This party itself was called Cocktails at the Castle: Hot Shop Herring - Glass Blowout, so-named because it's based on the Swedish tradition of a hyttsill where people gather for food and drink while watching glass blowers at work. So the ASI folks setup a really nice outdoor party with food, drinks, music, and glass-blowing. But they also wanted to entice people to come into the castle and the cultural center and look around so there were numerous smaller events within the castle and the cultural center - numerous parties within the main party. The one I went to was called "Knit Café at the Castle" and it involved both knitters and crocheters.

With that explanation, I'll tell the rest of the store in pictures and a few more words. 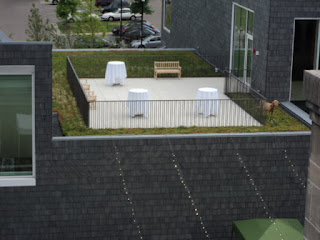 We were located on the top floor of the castle, the third floor, near a turret at the front of the mansion. This is the view out of the turret across the courtyard to a garden / sitting area on a roof of the cultural center. 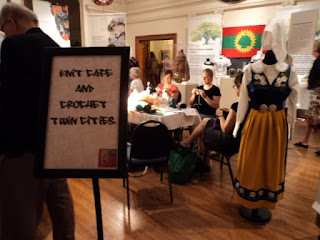 Our "job" was to sit next to the ASI's newest exhibit (Dressing Swedish) and work on our yarny projects while visitors walked by. We were also there to answer any questions visitors might have about our craft or to help them try their hand at a craft. And as part of the party, our hostess Nina was in a room close-by helping any visitors make Ojo de Dios (God's Eyes) of yarn. 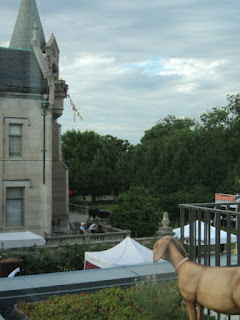 The strangest and most interesting part of our little party was the clothesline. Not an ordinary clothesline but a pulley clothesline that stretched from the turret down to the courtyard below. The idea was for us to bring and / or make items to hang on the clothesline - and the items were there to entice people to come into the castle. Here is a view of the clothesline from the roof top of the cultural center. 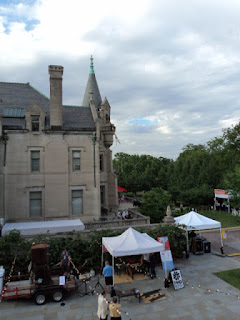 And here is another shot that shows some of the main party area in the courtyard with the clotheslines stretching down to the party area. 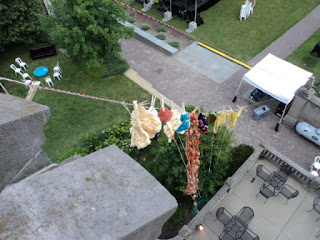 But here is the shot I like the best, the picture of the clothesline from the turret looking into the courtyard. Wow, that's a long way down! Nina and Cassie, our other hostess, warned me not to go out on the turret if I was afraid of heights. I was okay but I was really didn't "hang out" there too long. 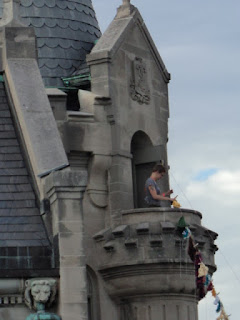 Cassie was in charge of the line and did all the work of attaching items while we crocheted and knitted to our heart's content, safely inside the castle.

I know you're curious about what kind of items we actually attached to the line so the last picture shows some of the items on the line. This is at the start of the party: by the end of the evening, the line was completely full from turret all the way down to the courtyard. The closest items to the top of the line (left side of the picture) are motifs that people in our group donated - Gail's turquoise butterfly (wish I'd gotten a better pic of these, everyone loved them), Julie's red open-work squares, and my stars. And yes, the two yellow items closest to the bottom of the line (right side of the picture) are the top and bottom of a scanty unlined yellow crocheted bikini from the 70s, donated to the line by one of the other volunteers. 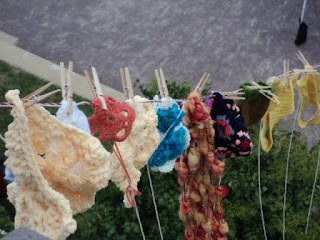 I did have a great time, passed out lots of our CTC cards (mostly to the others at the table). The woman who sat next to me is a grade-school teacher and mostly a knitter but she also crochets and is teaching her kids to crochet - I showed her how to make crocheted "bookworms", a perfect project for her kids. She also showed me some pics of her crochet-covered rocks, really nice. Another person at the table showed us her fun "topsy-turvy" knitted animals - turn them one way and they are one type of animal (a lion, for example) and turn another way and they are another type (an elephant). And yet another woman, a fairly beginning crocheter spent the night busily and ambitiously crocheting washcloths for all her friends and family for Christmas gifts! So even though I stayed up way past my normal bedtime and even though my commute home was way later and way longer than a normal commute, I'd do it again. It's always fun to meet other people who are passionate about their craft and to trade stories and ideas with them - the added bonus here was that I did a small part to help out a very unique Twin Cities organization.
at 5:22 AM