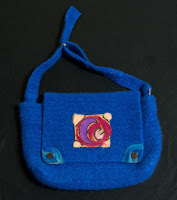 Joan brought a felted royal blue messenger bag that she designed and created for her granddaughter. She took a class at the Northfield Yarn Shop with her daughter and grandkids (ages 7 and 9) on needle felting, and the messenger bag is decorated with a motif her granddaughter made!  It took her from May to August to finish the project, but it is worth it. The bag is awesome. It is made from Lamb’s Pride, a blend of 85% wool and 15% mohair that felts us beautifully.


Jen shared a baby blanket that she made using her grandmother’s magazine pattern from the 1960’s. It is called “Easy Stitch Baby Afghan”, and looks like a granny square although it is mostly chains and double crochets. She made it up with leftover acrylic yarn in pink and green. We love the “easy” aspect of this project.Unfortunately, we didn't get a picture of the blanket so maybe she'll have to 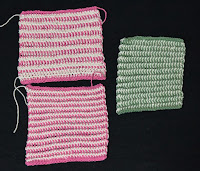 bring it back again.

Jen also shared some washcloths she made while practicing the Tunisian stitch. She used her double-ended hook to double crochet one way and single crochet the other, creating an interesting pattern. 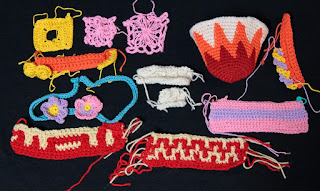 Gail shared a flower pot with a chevron design that she made in orange, rust and cream using the tapestry technique. She also had a swatch of a “thermal stitch” which was a double thickness done with one stitch which many requested she teach us how to do!  In addition, she reported on the  many classes that she attended at the Knit & Crochet Show in
Indianapolis in July and showed us swatches from all of them. 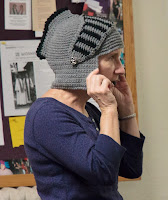 Carla showed two hats that she created from Pinterest photos her kids provided as “patterns”. She emphasized that the techniques she learned in Crochet Twin Cities were what gave her the skill to create the outstanding hats that she made since she needed to modify the patterns. She had a small, grey and purple felted earflap cap for a toddler (sorry, no pic), and a grey knight’s helmet with a moveable visor and a ridge along the crown for an adult. The knight’s helmet was a hit with the CTC group and her son!

Jo shared her ribbons from the Anoka County Fair for her maroon sweater (Sweepstakes), yellow filet centerpiece (blue ribbon), blue/green shawlette (blue ribbon), and green wire beaded bracelet (white ribbon). All these items have been explained in previous posts. She plans to enter some of these items in the State Fair as well! 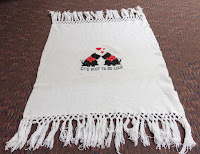 We had asked members to bring in Tunisian samples and Joy brought two afghans she made many years ago with the Tunisian simple stitch. Each had cross-stitch embellishments on them. The white afghan was done before she learned to do embellishments properly so the reverse side is messy. The flowered afghan was created in panels, and she did the counted cross-stitch properly on this throw, creating a stunning piece of work.

Julie had a number of scarfs to show us, all of them made with various Tunisian techniques. The first was from the Wingspan pattern on Ravelry - made with Hoops & Threads Woodlands colorway yarn (wool, nylon and polyester) in a lovely mix of oranges/rusts/reds.

She made two examples of the Cool Waves Shawl by Sheryl Means (Interweave Crochet Summer 2010); one in maroon and one in grey and green. Both used the same hook but one turned out much bigger so she must have started with more stitches.

This navy scarf is Misti alpaca yarn and the pattern is a Tunisian pattern that Julie designed herself. Finally, she showed a beige and grey heathered basketweave Tunisian stitch scarf which is so heavy that it can stand on edge with no support. 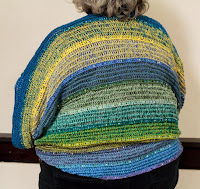 Speaking of Tunisian, Maxine modeled a shrug she made for last year's CGOA Design Competition - made in twelve colors of perle cotton and over 3,000 beads. The main body of the shrug is made by alternating rows of extended Tunisian knit stitch with rows of extended single crochet. She also passed around her entry for this year's design contest (a cape with felted yoke and lots more beads) but, due to rules of the competition, would not let us photograph it.

Last but not least, Betsy shared an amigurumi mouse that she made from a Ravelry cat toy pattern. It was bright pink with a sparkly tail and sparkly whiskers, and everyone loved it!