If you're familiar with Crochet Twin Cities, you know that we usually plan a special outing for any month that has five Saturdays. Our last Fifth Saturday outing landed about four weeks ago - the Saturday after Thanksgiving - and several of our members took a self-guided tour of one of the Twin Cities most unique museums, the American Swedish Institute. Maxine was our roving crochet reporter at this exhibit and shares with us some of her pictures and observations.

The American Swedish Institute, aka "the Castle" is one of my very favorite places in the Twin Cities. Despite learning about this museum over thirty years ago, I had never been inside until two years ago when our CTC group came to the castle for a lace exhibit. So I was really excited to go this year and see the Nordic Christmas exhibits - and even more excited when I realized that some of my family members who would enjoy the exhibit would be in town that day as well. 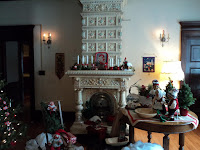 If you've never been to ASI before, it's basically two buildings - the Nelson Cultural Center and the Turnblad Mansion. You enter through the cultural center, the more modern building of the two, where there's a reception desk, cafe, and gift shop plus classrooms and offices. Then after you have purchased your tickets, you enter into the mansion, which is a castle-like residence built in the early 1900's. That is, it's looks like a castle on the outside. On the inside it is very ornate with room after beautiful room - not dark and dingy like you might think a castle would be. 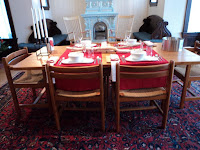 Every year ASI decorates five rooms at the castle in themes for each of the five Nordic countries - Iceland, Denmark, Norway, Finland, and Sweden. 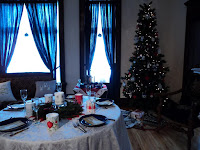 This year the special theme was "Christmas by Design" and the rooms were setup to show how design plays a role in creating holiday traditions.


I'm not sure that completely got the "Christmas by Design" concept they were after but I do think everything was beautiful. 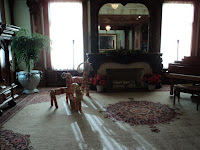 This is one of my favorite rooms - I think it is actually the Music Room and not one of the Nordic Christmas rooms. You can buy much smaller versions of the straw animals in the gift shop. 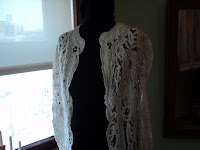 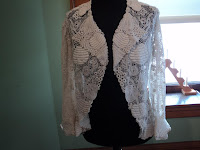 One of the reasons I love museums is that you can often unexpectedly find inspiration for crochet projects. These two lace garments were on display in the castle - I think they were in a room on the third floor (the bedrooms).

Aren't they both lovely? I think either would be very inspiring for anyone who wants a challenging Irish Lace crochet project. 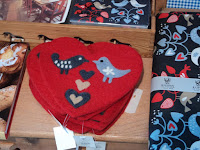 And then finally in the gift shop I spotted these cute little felted trivets. This would be a fun project to crochet the hearts and then felt them and put on needle-felted ornaments - or just do the whole thing in needle felt. Or maybe not - maybe just buy them!


All in all, a fun visit - so much more there than the photos show!

If you haven't had a chance to visit the ASI Christmas Rooms, they will be open through January 11, 2015 - or put them on your personal calendar for next Christmas!
at 7:30 PM