Gail has the honor of being one of our founding Crochet Twin Cities (CTC) members plus she is also the person in our group who has been a Crochet Guild of America (CGOA) member the longest. And, lucky her, she lives in Mahtomedi, a very short distance from a wonderful yarn shop, Lila and Claudine's. At the last meetup, we got a chance to hear Gail's story. 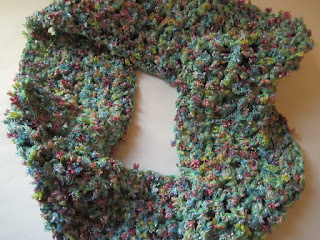 Gail, just how long have you been crocheting and who taught you to crochet?
I taught myself to crochet when I was pregnant with our first child so that was over fifty years ago. Back then, if you didn't have someone to teach, you had to learn from books and magazines. I wanted to make baby clothes so I bought pattern books with booties and sweaters - and learned from the instructions in the books.

Let's fast forward a few years. You've told us before that you were a member of CGOA before there was a CTC. Can you tell us how and when you found CGOA and then how CTC started?
I ended up with leftover yarn from the projects I was doing so I started looking for charities to make things with my leftovers - and when I looked for crochet charities, CGOA was always mentioned so I joined. Through CGOA, I learned about a conference in Indianapolis, IN called Crochet Renaissance that was to be held in September 2001. Then 911 happened, just two weeks before the conference but the show was not cancelled so I went. I was "hooked" and started attending CGOA conferences and I've attended at least one a year since then.

I knew that there were other CGOA members in the Twin Cities and that you could get a list of other members from the national CGOA office if you were interested in starting a chapter. Another person who was a CGOA member at the time asked the national office for the list and sent several of us an email and we had our first meeting at a local yarn shop - that must have been about seven or eight years ago. Then the Craft Yarn Council had a Knit & Crochet Event at the Mall of America and the local yarn shop had a booth there - some of us were stationed in the booth to take names and emails of people interested in a local chapter. So after that we started meeting regularly and grew from there.

My favorite thing about CTC and CGOA is meeting people, I like to see what everyone is working on and, for the ladies I've met at CGOA conferences, like to here how they've been doing since I've seen them last. I also like learning new crochet techniques - I always take a full class schedule when I go the CGOA National Conference.

Tell us a little bit about your crochet projects.
My favorite type of yarn is Bernat Satin. My favorite type of projects are ones that are easy to carry around with me, like hats and scarves - and that take only two or three skeins of yarn. Smaller projects give me a sense of accomplishment. My favorite place to crochet is everywhere. I carry crochet supplies and projects with me all the time.

Most of the items I make are for charity. I still make lots of baby items as well as items like scarves, prayer shawls, and hats. I crochet for fpurteen different charities and in any given month I make approximately 50 items (not counting bigger items like a blanket or two I might be working on). Yesterday, for example, I made four hats for one of the charity groups.

I mostly work with basic stitches because the project goes faster. I know how to how to read and follow patterns but I will change something if I don't like it - or combine two patterns together. I use both written instructions and charts - and go back and forth as I need to understand the pattern.

I do like to learn and try new things. The thing I'd like to learn to do next is to make bouquets of flowers from thread crochet - dimensional realistic-looking flowers with stems and leaves.

Can you tell us a little about some of the charity groups you do work for?


Each of the charity groups has special requirements - some have specific sizes for the finished items, for example, or want you to use washable yarn. I learn what the guidelines are then stick to them so that I know items will be used. A lot of people donate yarn to me for charity projects so that's one way I organize my stash - I also make sure I let the person who donated the yarn know what I made and which charity the items were donated to.

Wow, Gail, when your friends call you "The Crochet Lady", you've really earned that title!