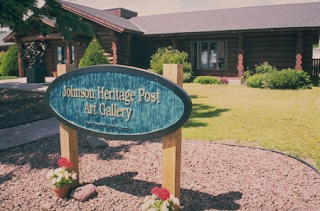 We've recently learned that member Jody has been really busy the last few months preparing for an art gallery exhibition in beautiful Grand Marais, Minnesota. This is a very special exhibit because it features art from five generations of her family - including posthumous displays of works from Jody's grandfather and great-grandfather. All in all, an amazing story and a unique and creative exhibit!

Jody, can you tell us a little bit about how this show came to be? Where did the idea come from?
The show was originally my mother's idea. She lives full times on the North Shore, where she has been exhibiting and selling her art for a number of years. A little over three years ago, she asked me and my sister if we would be interested in doing an art show with her in Grand Marais. We were both very excited about the possibility, so we started to talk about what would be involved and how we might present a thematically interesting proposal to the gallery.

The more we shared our own creative journeys with each other, the more we realized how important our artistic heritage had been, as well as how many members of our family had, or currently have, some type of creative outlet. We could have included works of art and music by many other family members, but we decided we had to stop somewhere! The current show includes the work of six people, spanning five generations:


What happened after your initial discussions three years ago?
We submitted a proposal to the Johnson Heritage Post Art Gallery (JHP) in Grand Marais way back in 2011, knowing that if it was accepted we probably wouldn't be scheduled for a gallery show before the 2014 season. We didn't even think about it again until we got the official notification from JHP earlier this year. Because of other family events, we didn't actually begin planning the collection in earnest until August, but it all came together pretty fast. 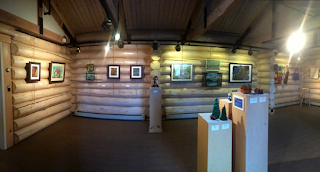 We did the actual exhibit installation in late September / early October with opening night on Friday, October 3. The exhibit runs through Sunday, November 2:  for schedule and hours click here.

What was the easiest part about putting the show together? What was the hardest?
For me, the fact that I wasn't doing this show all by myself really took the stress off, and being involved in a close collaboration with my mother, sister, and niece was so much fun. I consider the other three women to be at a more professional stage in their art -- my mother sells in several galleries and has been featured on the TPT show "Minnesota Originals," my sister has flown all over the world to complete decorative wall finishes for individuals and businesses, and my niece has had some of her large fabric prints displayed in the magazine "Home Beautiful" -- so I felt honored to be included in the group! 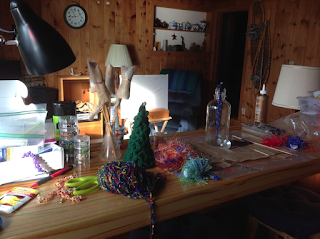 The hardest part was deciding what not to put in the show. We each struggled with how many pieces we should include to illustrate different parts of our own personal artistic journey. We were curating the pieces that would be in the show right up until the doors opened!

The other difficult thing was deciding how to price items that would be for sale. Each person was responsible for pricing their own pieces, knowing that the gallery would be taking a 20% commission (extremely reasonable!) and handling all the sales tax. I tried a whole bunch of different formulas, but in the end I felt like I was just throwing darts to determine the price, based on how badly I wanted it to sell. Some things are priced just above the cost of the materials and fees. Other pieces I priced to cover my materials, fees, and approximately $10/hour for labor.

Do you think coming from a family of artists has influenced the way you approach crochet and other fiber arts and, if so, how? 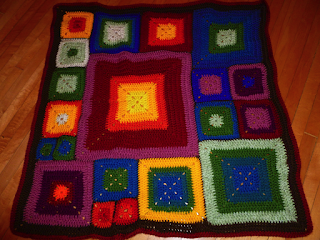 We always had fiber, fabric, and art supplies around the house when I was growing up, and you could always count on getting some type of art supplies for your birthday or Christmas! My mother has a degree in textile arts and was always sewing or weaving something. She encouraged us to use our free time to create things, and because there wasn't a lot of money in the family, gifts were often handmade. I have always felt much better giving someone something that I've made myself, rather than a store-bought item or a gift card, so somehow I learned that there was no stigma attached to handmade items and that I should appreciate the time and effort that went into making them. 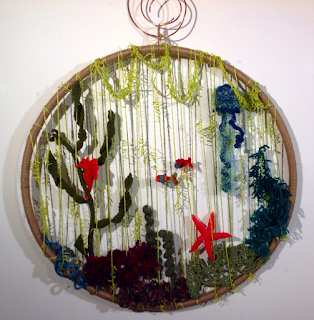 My maternal grandmother was the person who taught me how to knit and crochet. She knit very elaborate Christmas stockings for each person that joined the extended family - child, spouse, grandchild. I have most of the graphs that she drew before beginning work on a stocking, as well as a lot of her needles. When she died, all the family members who had received a stocking from her brought them to the memorial service and we strung them all from a clothesline across the front of the church. It was a pretty impressive line! She was also a non-stop crafter and baker. We lived very close to my grandparents when I was a little girl, so I would often walk over to gramma's house after school to help bake cookies or make table decorations for the next big event. Time spent with my grandfather always involved looking for interesting rocks or shells, or spending time in his greenhouses sketching the plants and learning about plant genetics.

Do you see any family resemblance in the artwork done your family? 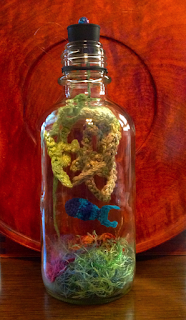 My great-grandfather and grandfather were both agronomists (field crop breeders), who had a deep respect for the beauty of the natural world. When the four of us who were setting up the show began assembling our art work, we realized that Nature was an important underlying theme that we all shared. Another common factor is that we are each more focused on process than final outcome, enjoying the way each piece evolves as it is created, rather than always starting from a set idea or pattern for what we are going to create. I found this to be especially true for the pieces that I made for my Sea and Reef display. The pieces took on a life of their own. I found myself viewing skeins of yarn, plastic bags, and other materials as the future medium for underwater creatures and plant life that would just grow when I picked up my hook. Another major part of my collection consists of items that were wet-felted, or pieces that were knitted or crocheted and then felted (technically "fulled"). The felting process is also one in which the maker is not always in complete control.

Did you and other family members do any collaborative pieces for the show? 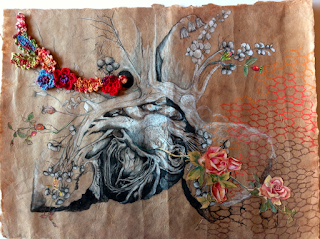 This photo shows the collaborative piece we worked on. My mother made the paper and added the hexagonal motif in the lower right corner. Then she sent it my niece who added the black/white heart drawing, before sending it on to my sister for some color work on the flowers and vines. I was last and added the crocheted floral/leaf piece that is in the upper left corner. My mother mounted it on a board that had been treated with some encaustics (which unfortunately don't show in the photo). The finished piece is is roughly 27" x 20" in size.

Besides your family, are there other significant influences on your work as a crochet artist? 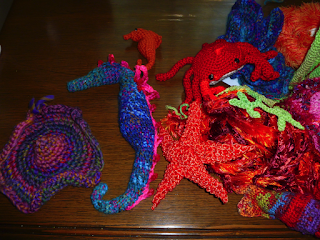 I have been strongly influenced by the work of Dr Daina Taimina, a mathematician at Cornell University, who uses crochet to help her students understand non-tangible mathematical concepts, such as the hyperbolic plane, by creating tangible items. Two sisters, Margaret and Christine Wertheim, incorporated Dr. Taimina's ideas into their efforts to bring attention to the effects of global warming and pollution on the Great Barrier Reef off the coast of Queensland, Australia, by beginning the Crochet Coral Reef Project , which was the inspiration for a lot of my pieces in the show.

And one last question Jody - how can people learn more about this exhibit? 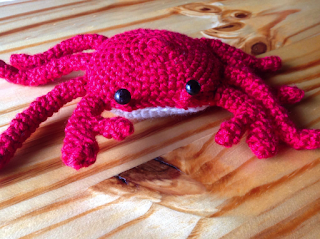 Doesn't that sound like a fun exhibit? Even though the fall color has peaked, there's still time to visit. Jody told us she put 85 separate pieces in the show and will be very happy if she doesn't have to cart everything back to the Twin Cities in November when the show ends!